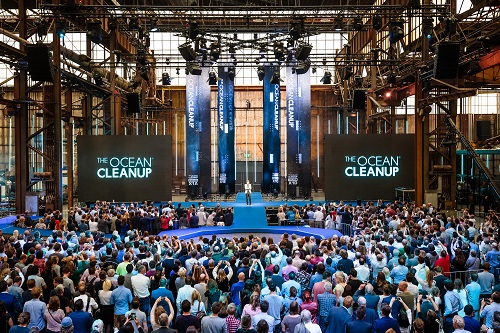 On 11 May, Boyan Slat, founder and CEO of The Ocean Cleanup Foundation, revealed to the world an improved design and concept of his project that will allow him to start the actual extraction of plastics from the oceans two years earlier than planned. As a proud supporter of The Ocean Cleanup, we managed media relations and public relations running up to and during the event, just as we have done for previous milestones.

After some years of testing and researching, Boyan and his team substantially improved the technology. This will result in a more efficient cleanup that can start much earlier than anticipated. According to current plans, a large-scale pilot will be launched off the US West Coast before the end of the year.

A big change compared to the prior design is the scalability. Initially, the cleanup was conceived as a 100km long array placed strategically in the gyre. In the new design, there will be dozens 2km long installations placed throughout the gyres. Major advantages to having many small arrays is that less funding is needed to get started and that testing can start earlier. A design error can be corrected early in the process, should one become apparent.

A second major revision is that the arrays will no longer be moored to the bottom of the seas, a complex aspect of the old design. In the new design, the arrays will have large anchors that reach to lower and slower ocean currents. Or, in Boyan’s words: ‘In order to catch the plastic, behave like the plastic.’ The fact that it’s now a floating device lets the arrays move with the plastic, maximising their efficiency and plastic-catching abilities.

Boyan presented his innovation and some of the 4m. tall new anchors at an event in the Werkspoorkathedraal in Utrecht, in front of more than two thousand supporters. International media attention was overwhelming. During the event and the days leading up to it, our team organised and coordinated numerous interviews with Dutch and international press, garnering attention from major outlets including Huffington Post UK, CNN, CNN International, ABC, BBC, Der Spiegel, Business Insider, New York Post, CNBC, Yahoo News, and Trouw. More recently, in Het Financieele Dagblad, Dutch Prince Constantijn called Boyan Slat and The Ocean Cleanup an example of how the innovation-driven Dutch business culture could overtake Silicon Valley.

Boyan has received numerous prizes over the past years as recognition for his ground-breaking invention, such as the UNEP Champion of the Earth Award. Just last month, Boyan Slat won the Creative Heroes Best Start-up Award.

Watch the awesome video by CNN about The Ocean Cleanup’s new design for the largest ocean cleanup in history.

Citigate First Financial has been a proud supporter of The Ocean Cleanup since 2014, helping Boyan raise his profile and awareness for his solution. We are looking forward to playing our part in the largest cleanup in history and wish Boyan and his team all the best leading up to the next big milestone at the end of this year!